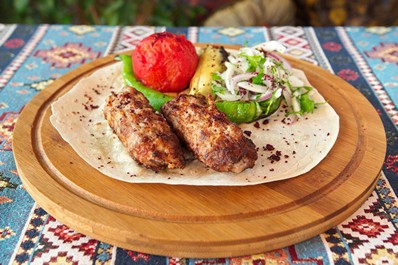 Our national cuisine is extremely rich. Some 2000 meals are known in the Azerbaijani cuisine. According to Anthony Jackinson, the English voyager, when he was a guest of Abdulla khan in Shamakhy, 150 types of meals had been served for his one lunch, and, after taking the tablecloth back at the end of the lunch, he was produced 140 types of meal. Such a rich cuisine had been historically created by housewives and specialists.

Such diversity was, at the same time, possible through the help of labour division between the specialists. Ottoman traveller Evliya Chalabi recalls that “thousands of people had been working here in 12 cook-houses associated with 12 imams.” He referred to them calling them as baker, “yukha salan” (a man rolling out thin sheets of dough), shatyr (baker), ashchi (cook), “piti” cooker, kebab roaster, tea-server, “halva” maker, confectioner, “sherbet” maker etc. Specialists carrying the names of the same meal and products groups are working today at our catering establishments. Such internal division of labour and its development has caused an increase in the number of meals. For example, there are 200 types of pilaf, 20 types of dolma and 20 types of lyulya kebab.

Since ancient times, meats of neat and small cattle are used. The sources have shown the use of horse meat at the early stages of the development of the cuisine. Today Azerbaijanis do not use horse meat in their meal. Old people so far remember the taste of camel meat, especially gutabs made with camel meat. The meat of wild animals and cattle is widely used in our cuisine. The meat of male sheep, two-three-year-old sheep, castrated animals is considered to be softer and more tasteful. The meat of animals browsing on upland and foothill districts’ grass-plots, which resembles white marble, is given preference. In such meat, fat drops are in the cell structure itself. Fresh meat is preferred to frozen meat. In addition to meat, the fat of a sheep’s tail and auxiliary products are also used in meals.

In order to keep meat for a long time, it is cut into small pieces and fried together with tail fat and filled in a wineskin, special earthenwares and poured over melted fat. In addition, over dried meat also may be stocked.

The meat of poultry and wild birds, as well as their eggs, is used in our cuisine. Wild birds hunting begins after the snow has melted and the beaks and legs of birds turned red from the cold. Poultry such as goose, turkey, duck and chicken are widely used in meals. In many cases, birds are placed in special cages so that they did not move much. Here they are fed with feeding stuff containing more fat (corn, sunflower seed etc.). In this case, bird meat becomes fatty and tender. Bird fat is considered to be of better quality as compared with animal fat. Bird meat and animal meat are cooked wholly, in the form of large and small pieces, separately or together with other products.

Since ancient times, forcemeat is also used in our cuisine. In order to prepare dolma, kufta etc., and meat should be put through a mincing machine. Caspian Sea, Kur, Araz and other rivers, Goy-Gol, Jeyranbatan, Goyja and other lakes have enriched our cuisine with delicious meals made from fish. Many types of various meals prepared from fried, scalded, stuffed fishes adorn our tables. Fish meals are prepared from a whole fish, its large and small pieces, as well as stuffed fish. Black, red and pressed caviars are widely used.

Of the bird products, eggs of hen are used more in meals. Eggs of quail are being used in dietary cuisine. “Scrambled eggs”, “chalkhama”, “kyu-kyu”, “chyghyrtma” etc. adorn our tables. Azerbaijani milk cuisine has a very wide assortment and is rich. Milk, “ağız süd” (milk of a cow, which has just calved), “colostrums”, “sour clotted milk”, “cheese”, “dug”, “cream”, “chiye”, “buttermilk”, “curd” and other milk products and meals prepared from them — dovga, dogramaj, pilaf from buttermilk, atlama, milky porridge and other meals have since the ancient times enriched our cuisine.

The Azerbaijanis treat bread — different breads such as yukha, fatir, lavash, khangal, khamrali, tendir chorak etc. with different forms and thickness, which are the main wealth of our table, with great respect. If bread is served, Azerbaijanis first, as a sign of respect, reach for the bread, because they think bread is superior to everything. They respect bread as much as Quran and swear by bread.

Floury meals and culinary products play a special role in our cuisine. It should be noted that most of the meals prepared from meat and dough are related to allTurkish people. Historian Farig Sumer tried in his book “Oghuz people” to prove that saljugs were Turks and brings one more example that saljugs ate “tutmaj” (meal made from noodles and beans), “khangal” (watery khangal and leaf-khangal), “gurza”, “dushbara”, “khashyl”, “horra” and other floury meals. In the meantime, these meals were basically prepared in winter.

However, the most respected meal is pilaf. In Azerbaijan, which can be considered one of the native countries of rice, there are about 200 types of pilaf. For some districts of Azerbaijan rice replaces the bread. For example, in the past, people in Lankaran were not using bread at all.

Sweets, confectioner’s products, and halva have their special place in Azerbaijani cuisine. The cause of this was the production of sugar in Azerbaijan since the old times. Sugar had been received from sugar cane. It was brought into Azerbaijan by prince Potyomkin from Russia by the order of Ekaterina. This sugar was called “wooden sugar”. This type of sugar was received from sugar-beet. Azerbaijanis received this type of sugar in a cleaned form, although refinement of sugar in Azerbaijan occurred in X Century. In addition to these types of sugar, fruit sugar- nabat were also produced. Large amount of honey and types of bakmaz received by means of cooking fruit juices had improved the assortment of the sweets. Our housewives and meal specialists are pride of “baklava”, “shakarbura”, “rahat lukum”, “richal”, “sujug”, “peshmak”, “peshvang”, “guymag”, “gatlama”, “yukha halvasy” etc. Abundance of sweet basis (honey, sugar, bakmaz) and fruits have caused the creation of delicious products in our cuisine. They include various jams, stewed fruits (compotes), sugared products prepared from cornelian cherry, quince, cherry, fig, and kernel of a nut and petals of a rose.

Preservation of vegetables by means of pickling and salting has been widely applied in Azerbaijan. Curing and dietary cuisine have a special place in Azerbaijani cuisine. “Umaj”, “khash”, “horra”, “guymag” and other meals had been used since the old times as a factor of treatment. Main part of the cuisine consists of meals for parties and holidays. Meals from malt are prepared only at Novruz Bayram, “qovut” only in Khydyr Nabi Bayram (Holiday), “hadik” and “govurga” (browned wheat) only when a child is cutting teeth, or old men over hundred lose their teeth, specially preserved watermelon is cut at “kichik chilla” (a period of twenty days of winter).

Among daily light snacks of Azerbaijani cuisine may be shown “yakhma” (open sandwich), “durmak” (a thin bread – yukha or lavash – fold up in the form of a pipe or bread baked in tendir, khamraly and other types of bread cut in half lengthwise and stuffed with butter, cheese etc.). It is also called “bukma” (from the word “fold-up”) or “jibli” (cutting bread in half lengthwise in the form of a pocket) accordingly. Durmak is served both in cold and also in hot conditions.

Appetizers-salads should also be mentioned among the snacks. Desserts (fruits, dried fruits, nuts, hazelnut etc. may) are served at the end of the meals. One of the factors defining the richness and diversity of the development of cuisine is sauces and broths. Famous Ottoman traveller Evliya Chalabi wrote in XVII: “There are, in addition, 12 types of sauces and broths here”. Sauces made from sour milk and garlic, vinegar and garlic, condensed honey or cream, fruit juices are used widely. Sauces prepared from marshmallow sticks (is prepared from thin fruit porridge) and lavasahana (dry marshmallow sticks) are used in various meals. Narsharab (sauce cooked from pomegranate juice) or sauce on the narsharab base is served together with fish meals.

Menu in the Azerbaijani cuisine is usually made up depending on the time of year, weather, age, lifestyle, place of location of a consumer, etc. Groups of meals such as meals for lowland, dietary meals, meals for a woman in childbirth, meal for a bride, meal for a bridegroom, meals for children, youth, and old men are known.

The Azerbaijanis that are the longest-leaving people of the world have at the same time created a healthy cuisine since it is difficult to live long without having a healthy cuisine. Traditional Azerbaijani culture of meal requires eating a meal with hands. Thin bread such as yukha, sanjak, and lavash is folded up like a spoon and the liquid part of a meal is eaten with such an improvised “spoon”. And the hard part of the meal is eaten using the hard part of the bread. Eating with hands has a number of advantages:

1) There are very sensible nerve tips on the tip of a finger. Extrasensory individuals do not without reason work with their hands, and blind persons as though see with their hands. Hands feel heat composition and consistency of a meal;

2) When taking a meal into the mouth by spoon or fork, the mouth cavity may be burned or caused to seriously shiver. In the case of eating with hand, food enters the moth cavity at a temperature close to that of the body, and at such a temperature taste receptors and ferments work better in the mouth cavity. Such food is not swallowed and is carefully chewed. Islam does not prohibit eating and drinking hot without reason, Islam recommends that they be taken in form condition;

3) While taking meals using metal forks or spoons, metal ions kill fluorine and iodine. And this results in the decaying of teeth;

4) Eating with hands makes people follow a high level of hygiene, hands are required to be carefully washed, and this turns the meal-taking into a small holiday and prepares people for easily taking of meal without any haste from the psychological point of view.  According to custom, after the hands are carefully washed, fingers are moistened in rose water.

However, in Azerbaijani cuisine, the most important one is not tasty meals and aromatic drinks, nice fruits, but the guest. On the basis of the philosophy of Azerbaijani cuisine stands a guest. Therefore, welcome and please be our guest.