Azerbaijan on the International Arena 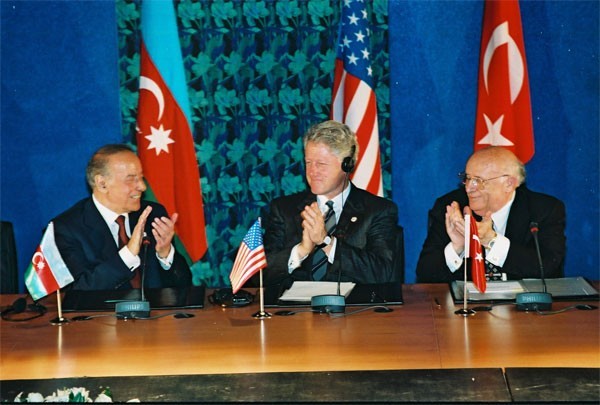 Azerbaijan has been following an independent foreign policy since regaining independence in 1991. This policy aims at the strengthening and development of the state system and the protection of the national interests of Azerbaijan. Azerbaijan builds its foreign policy on the principle of respect to the international legal standards and norms, the state sovereignty and territorial integrity, and the principles of nonintervention into the internal affairs.

The foreign policy of Azerbaijan, adhering to these principles and speaking on behalf of the national interests targets such urgent issues as the risks and challenges to the national security and territorial integrity, sovereignty and independence of the republic and the prevention of the intervention of the Republic of Armenia. The major priorities of the foreign policy of Azerbaijan are the establishment of regional peace and stability, the implementation of large transport and cooperation projects.

The attraction of the foreign capital to the implementation of different projects on the development of the country’s economics for more effective protection of the national interests plays a great role in the foreign policy of Azerbaijan in the present-day world. Thus, Azerbaijan has chosen the democratic way of life determined its task in the establishment and development of mutually profitable bilateral and multilateral relations with other neighbor and faraway countries in different spheres.

Azerbaijan, expanding and developing its regional and global activity and international cooperation, became a member of a number of international organizations such as the United Nations, the Organization on Security and Cooperation in Europe, European Council, Organization of Islamic Cooperation, Commonwealth of Independent States and others. Moreover, Azerbaijan was one of the cofounders of GUAM.

Azerbaijan is not represented in military alliances, preferring multilateral cooperation to bloc confrontation.  The membership of Azerbaijan in the Non-Aligned Movement is evidence of his policy.

The steps undertaken by the government of Azerbaijan in Europe correspond to the attempts of the foreign policy as its integral part. Europe, which is rather based on real cooperation and partnership than on the old models of influence, promotes the establishment of a single structure for security and common welfare but at the same time, it may lead to the emergence of new challenges. Therefore, Azerbaijan, considering the established objective situation intensifies its activity within the anti-terrorist coalitions and cooperation with NATO and European Union.

Azerbaijan protects and implements its national interests through participating in the regional initiatives the activities of the aforementioned international organizations.

The development and implementation of the measures foreign policy of Azerbaijan serving the protection of the national interests is connected with our national leader Heydar Aliyev. His talent of the strong state system establishment, deep logic, and understanding of the importance of issues enabled to form a correct approach to the establishment of international relations.

The present-day foreign policy of the Republic of Azerbaijan, conducted under the leadership of President Ilham Aliyev, demonstrates its adherence to the course of development of mutually profitable relations with all goodwill countries and aims to develop Azerbaijan and to provide for the permanent prosperity and the welfare of the people.

The diplomatic activity carried out in frames of this complicated and many-sided process is composed of a number of major trends that constitute the foreign policy of Azerbaijan.

The main direction of the country’s foreign policy for a long time was the unresolved Armenia-Azerbaijan Nagorno-Karabakh conflict, which arose as a result of territorial claims and the aggressive policy of the Republic of Armenia towards Azerbaijan.

The legal and political constituents for the settlement of the conflict have been laid down in the norms and principles of international law, in particular those pertaining to respect to sovereignty, territorial integrity and inviolability of international borders of states as well as the United Nations Security Council resolutions 822 (1993), 853 (1993), 874 (1993) and 884 (1993) and appropriate documents and decisions of OSCE and other international organizations. The above-mentioned Security Council resolutions were adopted in 1993 in response to the occupation of the territories of Azerbaijan and reaffirmed respect for the sovereignty, territorial integrity and inviolability of the international borders of the Republic of Azerbaijan. The resolutions demanded immediate cessation of all hostile acts, and immediate, complete and unconditional withdrawal of occupying forces from all occupied territories of the Republic of Azerbaijan. They qualified Armenia’s actions as the unlawful use of force, in contravention of the Charter of the United Nations and international law. The resolutions also formed the basis of the mandate of the Minsk Group of the OSCE and its Co-chairmen and provided the framework for the settlement of the conflict.

Despite the legally binding nature of the UN Security Council resolutions they have remained on paper for decades.

However, in late September 2020, with the successful military operation of the Azerbaijan Armed Forces, Azerbaijan was able to implement these resolutions through liberating its internationally recognized territories. Azerbaijan`s military advantage induces the Armenian side to come to the negotiation table. On November 10, 2020 a major step was taken toward resolving the conflict with the signing of the Trilateral Statement by Azerbaijan, Armenia, and Russia.

The agreement comprised the unconditional withdrawal of Armenian military troops from the occupied territories within a definite schedule, as well as the return of all IDPs to their homes and

opening of all communications in the region.

Undoubtedly, Azerbaijan regaining its occupied territories opened the doors for permanent stability, peace, and security in the whole region of the South Caucasus.