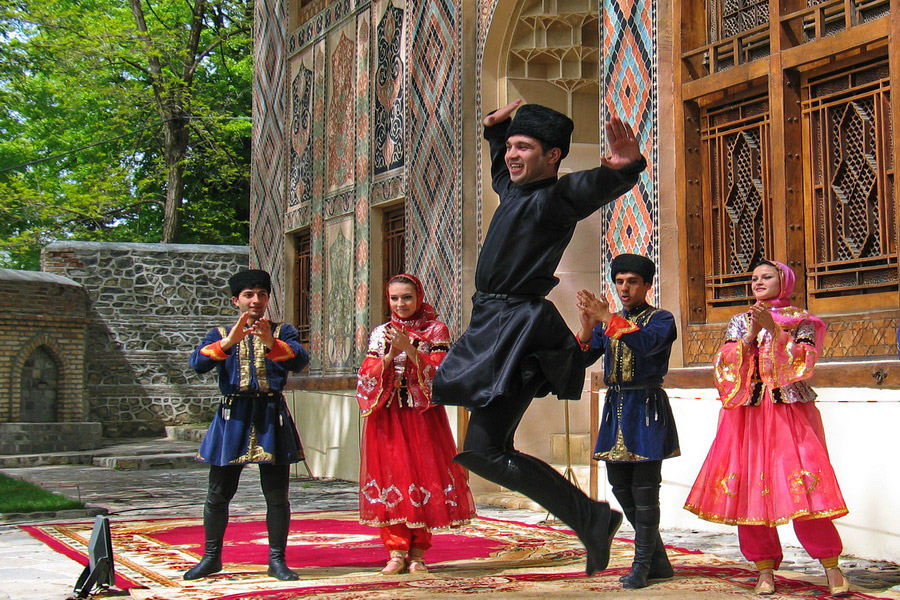 One of the world’s most ancient nations – the nation of Azerbaijan – has the right to feel proud for its history, material and cultural monuments, literature, arts, and music heritage.

The wonderful nature, climate, natural resources of the country produced a significant impact on the artistic thinking and creation skills of the Azerbaijani people as well. Despite the long and difficult way undergone by different types of arts in Azerbaijan, they still represent unity and provide outstanding opportunities for the creation of a full idea of the fine arts of Azerbaijan. The folk arts of Azerbaijan are multi-colored, complete, and rich, as its natural resources. Folk art is connected with the daily life of people and daily life occupies a very special life in the fine arts as well. Folk arks cover a long period from ancient times to nowadays and including a variety of products from garments to housing goods and decoration.

Quite obviously, the style of life, aesthetic tastes, the national image, and qualities, are strongly reflected in folk arts. One can easily come across numerous wonderful models of Azerbaijani folk arts in the world’s largest museums. The pieces of arts created by the skillful hands of Nagorno-Karabakh, Tabriz, Ganja, Gazakh, Guba, Maku, Shaki, Shamakhi, and Nakhchivan can be found in large museum collections of Victoria and Albert of London, Louvers of Paris, Metropolitan of Washington, and Vienna, Rome, Berlin, Istanbul, Tehran, Cairo museums.

The history of folk arts in Azerbaijan has a long and interesting history. Works of art made from metal extracted from Nakhchivan, Mingachevir, Ganja, and other places are approximately 5000 years old. Crockery, weapons, and adornments found here are not historical facts alone, but valuable sources, which testify the skills of the master. Material and cultural models, found during archeological excavations in the territory of Azerbaijan, testify that our ancestors made crockery, daggers, axes, belts, and adornments of bronze and used them in daily life. This proves the ancient age of such types of activity as a copper-smithy and gold smithy.

There are those with portrayals, showing traditions, religious ideas, and even garments of people of that epoch among art patterns made from metal. History, of ethnographical and artistic features of folk art, is reflected on the garments. These features are reflected both on garments of a certain form and their adornments and fine needle-work, knitting.

Bronze needles and awls from the beginning of the bronze epoch (III millennium B.C) were found during archeological excavations in Azerbaijan as well. These findings prove that the ancient population of Azerbaijan could sew clothes for themselves. Little clay statues founded from Kultapa and Mingachevir (III millennium B.C) and seals of the V century B.C found in Mingachevir provided opportunities to have a certain idea of garments of that time. Clothing remnants made from different silk materials are found in Mingachevir catacombs of V-VI centuries B.C. The number of adornments (III-IV century B.C), made of gold, and clay crock of foot-gear form are well-grounded shreds of evidence, proving the old high material culture of Azerbaijanis.

Different pictures scraped on housing implements made from copper, bronze, gold, and adornments, prove the existence of fine art in Azerbaijan since ancient times. Horse-cloth with flowers on clay figure of a horse (II millennium B.C.), found in Maku in South Azerbaijan, golden basin with a picture of the line (I millennium B.C), found in Hasanli hill near the Urmiya lake, and other findings show the ancient history of carpet-making, one of the branches of folk art in Azerbaijan. Remains of palaz (a kind of carpet without pile) and the carpet of I and III centuries discovered during an archeological dig in Mingachevir.

According to archeological dig and written sources Azerbaijan people have been occupying with carpet-making since the bronze epoch (late II millennium – early I millennium). Herodotus, Klavdi Elian, Ksenofont, and other world historians wrote about carpet-making development in Azerbaijan. Carpets, weaved by separate carpet-making schools of Azerbaijan (Guba, Baku, Shirvan, Ganja, Gazakh, Nagorno-Karabakh, Tabriz) in different periods, amaze people till nowadays. Most of them kept in well-known museums of the world. Gobustan rock pictures, pictures, belonged to the early bronze epoch (III millennium B.C) in Aychingilli and Parichingil mountains near the Zalkha lake in Kalbajar region, rock pictures in the Gamigaya Mountains in the north of Ordubad town have exception importance among the eldest patterns of fine art. Pictures about ancient people’s mode of life, welfare, labor, carved in the Gobustan rockeries, represent special interest. Different subjects, scenes on hunting, cattle breeding, planting, and other branches of household, human and animal pictures were carved dynamically. The Gobustan rock pictures – pictograms cover multi-centuries old history from primitive communal order to feudalism. Azerbaijan was rich in architectural pieces one of the branches of folk art along with works of fine art since ancient times. Maiden Tower and Shirvanshahs palace in Baku, Momina Khatun and Yusif ibn Kuseyr mausoleums, created by architect Acami in Nakhchivan, Natavan’s home, pictures on walls of Shaki khan palace and other patterns are rare pearls of architecture.

The motherland of Azerbaijan people possessed rich musical and cultural heritage is famous as Land of flames. Azerbaijan music, enriching world musical culture with its rare pearls, has multi-centuries old traditions. Creators of folk music, handed over these traditions to generations, have a great role in the development of Azerbaijan music. Folk songs, dances, ashig creation (folk poet and singer) have a specific place in Azerbaijan national music. Mugams are the foundation of Azerbaijan national music. It is not accidental that UNESCO, a specialized organization of UN, entered Azerbaijan mugam into the list of world cultural heritage. Our national music has been developing along with literature since ancient times. For instance, mugam developed along with Eastern poesy. Thus, singers, performed mugam, recited gazals (a kind of poem) by Azerbaijan well-known poets as Nizami, Khagani, Fuzuli, Nasimi. Poetic forms of national poesy like Garayli, divani, tajnis along with goshma, mukhammas, ustadnama, gafilband are ashigs’ favor forms. Works of art, created by classics and contemporaries, take honorable place in world cultural treasure. Works by M.F.Akhundov, N.Vazirov, M.S.Ordubadi, G.Zakir, M.A.Sabir, J.Mammadguluzade, M.P.Vagif, M.V.Vidadi and other poets and writers hasn’t lost their aesthetic importance.

One of the art kinds, related to Azerbaijan literature, is theatre. The roots of Azerbaijan theatre art related to people’s activity, mode of life, solemn and wedding traditions, range of vision. Elements of spectacle in rites, ceremonies, and games took an important role in popular theatre. It was realistic and related to working categories. The repertoire of popular theatre consisted of short spectacles of ethical content. Popular theatre played an important part in the establishment of Azerbaijan professional theatre. Roots of theatre art, dated to old times, started with spectacles “Vizier of Lankaran khanate” and “Haji Gara” by M.F.Akhundov, staged in Baku in March and April 1973. The repertoire of Azerbaijan theatre passed a difficult way of development, has been enriched now. Different spectacles, amazing spectators, are staged in Academic National Dramatic Theatre, Municipal Theatre, Pantomime Theatre, Theatre of Young Spectators, etc.

The history of Azerbaijani cinema is part of the history of Azerbaijani culture. National cinematography opens the bottoms of the human heart and new live horizons. It gained great experience year-by-year and created several different works, reflecting our people’s lives and problems. These films were kept for future generations and became people’s spiritual knowledge. Azerbaijan fine art is as old and rich as the history of our people. Research of theatre, cinema, music, and folk art, passed a long and difficult way of development, proves high cultural heritage of Azerbaijan people. Culture and fine art workers of Azerbaijan always make efforts to spread our culture to the world and has achieved it partly. Entering of Azerbaijan mugam into world cultural heritage by UNESCO, rewarding of well-known film master R.Ibrahimbayov, screenwriter and producer by “Oscar” and keeping of manual works and carpets, made by popular masters in famous museums of the world are obvious proves.